On the 11th June, the John Rylands Library Special Collections put together a stall for the Manchester Histories Festival which focused upon the Guardian Archive.

We had a couple of aims for the day, to publicise the collection and promote its use, and also, if possible, to gather information from the collective memory of Manchester. The second of these objectives evolved whilst material for the stall was being selected. The Guardian Archive contains a number of photographs, many of which were taken by their staff photographer, Walter Doughty.

These photographs show employees at the Manchester Guardian and Manchester Evening News at work, carrying out the various functions required to produce a daily newspaper. The majority of these photographs don’t include descriptions, or dates, and they feature equipment and practices that we were not always able to confidently identify. Our hope was that we might meet someone at the Histories Festival who would be able to assist us.

Luckily for us, we did!

One of our favourite pictures, of the last horses to retire from the newspaper’s delivery service in 1952, generated a memory in one of our visitors. He remembered seeing an article published at the time the horses were retired which included this photograph, and that described the distinctive chocolate and gold livery of the horses.

We also had the good fortune to have a visitor who had worked for a number of newspapers during the 1950s and 60s, and provided us with details including:

The employees in this picture are operating linotype machines, which were used for typesetting. The keyboards pictured produced lines of metal text for use in the printing press.

The printing press pictured is a Crabtree Viceroy Rotary Printing Press. The size of reels used for printing is determined by the number of pages to be printed. A broadsheet requires a 60 inch reel.

The employee in this picture is working as a fly hand, and would remove completed copies of the paper from the press by hand. The paper for each copy was measured in quires, and the speed of the printing press could be altered using the control panel pictured in the top left hand corner of the picture. This could, on occasion, be used by employees to play pranks, as it was easy to amend the speed on a machine in passing and increase the speed of work for an unsuspecting colleague. 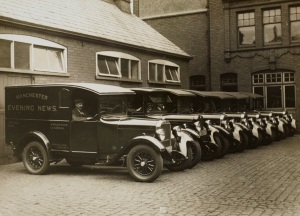 There was a date attached to the delivery vans in this photograph of 1955, but a visitor who was more versed in the history of automobiles suggested to us that the cars pictured were far more likely to be from the 1930s.

We also heard an anecdote about C.P. Scott, who, in later life, reportedly fell off his bicycle whilst cycling home in the snow, and was aided by a policeman who, not recognising Scott as editor of the Manchester Guardian, expressed indignation that an elderly man had been kept at work so late in inclement weather!

The information we gathered at the Manchester Histories Festival enhanced our knowledge of the collection, and as a bonus, I got to hear people from the city talk about their pride in the origins of the Guardian. My opening explanation that the Guardian was originally the Manchester Guardian proved to be quite unnecessary, as more often than not, it was greeted with: ‘Oh, we know!’

We also learned from a visitor that the John Rylands Library had been built in what was, at the time, Manchester’s red light district…but that may be a story for another blog post.

Images from the Guardian archive are reproduced courtesy of Guardian News and Media Ltd.

2 thoughts on “The Manchester Histories Festival: What We Learned.”