I hope the delightful image above sets a suitably festive tone to what will probably be our last posting of 2012. Since we launched our Blog in May, we have attracted a goodly following, with almost ten thousand ‘hits’ in total, a third of which occurred earlier this month when we announced the digitisation of a collection of Manchester maps, including a set of bomb-damage maps from the Second World War. 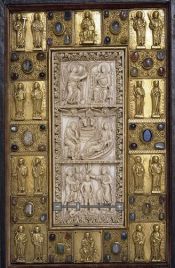 vity scene is carved on one of two ivory plaques inlaid into the Trier bookcovers. The ivories have been dated to the tenth century, while the gilt metal surrounds are from the thirteenth century. The whole has been assigned to Trier, now in south-western Germany. The 26th Earl of Crawford purchased the bookcovers (long separated from the manuscript they originally contained) for £1000 at the Bateman of Youlgrave sale at Sotheby’s in April 1893, against fierce competition from the collector Frank McClean and the South Kensington Museum (V&A). They had earlier belonged to the poet Samuel Rogers. Lord Crawford had a passion for ivory and metal bindings, and as a result the John Rylands Library holds a particularly fine selection of antique and medieval bookcovers and plaques.

You can explore the Trier bookcovers in marvellous detail on our Luna image database, by clicking on the lower image.

We wish all our readers and visitors a Merry Christmas and a Peaceful New Year. The John Rylands Library reopens on 3rd January.